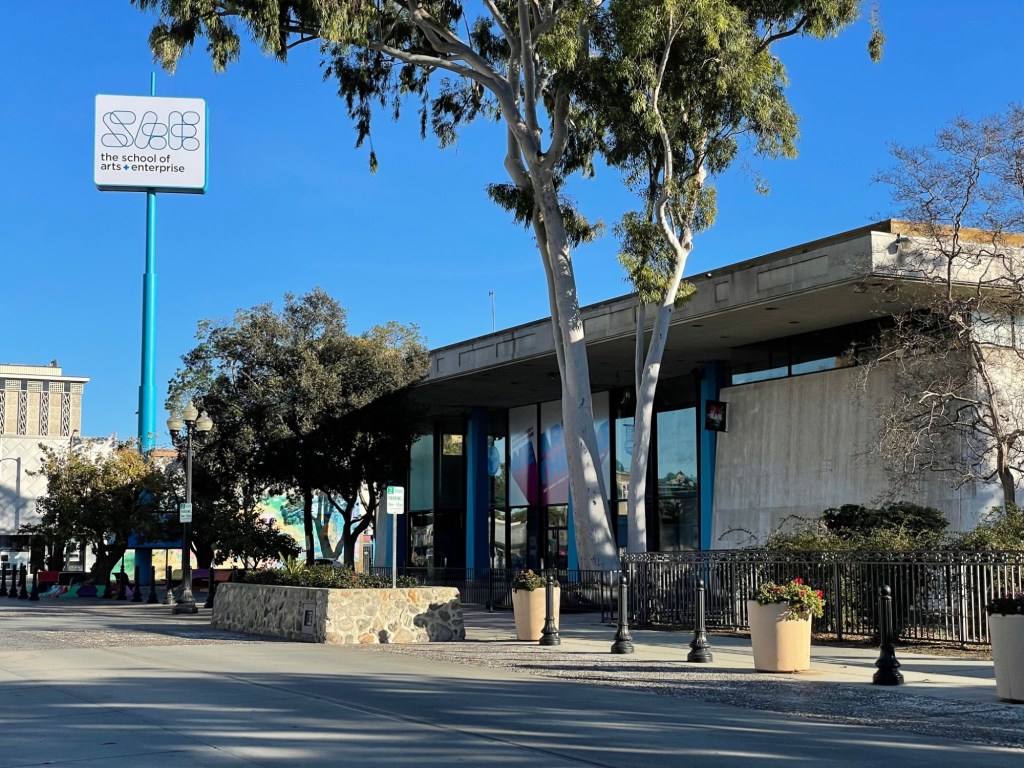 The two-sided panel, approximately 50 feet high on top of a pole, does not rotate. But in a strong wind, it shifts, creaks slightly.

I like to visit the colony and take walks. It’s peaceful – more so than downtown interests would like, of course. And a few weeks ago, I was surprised to see the sign get a facelift: vibrant paint and new faces for the sign, touting the charter high school that occupies the old bank.

Curious, I contacted Ed Tessier. His family owns the building, founded the school and launched the Arts Colony, with its lofts and galleries, in 1994. What, I asked, is the story behind the sign? I thought that was well worth a paragraph.

It turned out to be too complicated for that, obviously – I’m already at paragraph five – but you could say that the story begins with the 1962 opening of the Second Street pedestrian mall.

It was the pioneering attempt, the first on the West Coast, to entice shoppers by banning cars and making a traditional downtown area as pleasant as an indoor mall. Riverside, Corona and Santa Monica, among others, then followed suit.

Sheets, who was designing Home Savings branches for Howard Ahmanson, persuaded him to build one at Second Street and Garey Avenue as almost a personal favor. Tessier said the move prompted a major competitor, Lytton Savings, to build its own branch two blocks away on Second and Main streets in 1964.

Lytton clad his Pomona Building, with sloping, sloping walls, in travertine marble, preceded by a colonnade. A public square of trees and wooden benches faced the building. Kurt Meyer – more on him in a moment – was the architect. Lytton gave it his all.

“I heard anecdotally that it was a case of one-upmanship,” says Tessier.

The mall briefly energized the street, but the boost didn’t last. Lytton gave way to Equitable Savings and Loan in 1969. The building was still striking: famed architectural photographer Julius Shulman photographed it inside and out that year.

Mergers and acquisitions meant that Equitable gave way to Great Western Savings, American Savings and Washington Mutual, who in 1999 put the surplus branch up for public auction.

Jerry Tessier, Ed’s brother, came across the auction and the small group of bidders. Realizing that prime real estate was for sale on the cheap, he acted.

“Jerry gathered a bunch of credit cards and bought the building. I think he maxed out every credit card,” Ed recalled. While declining to name the price, he said, “He got a bargain.”

Well, colleges didn’t last either. But when Mt. SAC left, the fledgling School of Arts and Enterprise, a charter school established by the Tessiers to emphasize arts education, held its first classes upstairs in 2003. After the leaving Cal Poly in 2009, the school took over the entire building.

Now, about the pole sign. He is not present in any photo from the 1960s. Must have arrived in the 1970s. Tessier grew up seeing ‘Great Western’ on his twin faces.

“It was internally lit and ran on one motor. I thought it was infinitely cool,” he recalls.

The town center was so uncrowded that teenage Tessier liked to stand in the middle of the intersection and throw a tennis ball at the slowly spinning Great Western sign. He was timing his throw when the backboard was facing him so the ball would come back to him.

After the purchase of the old bank by the Tessiers, a Hollywood production wanted to film outside. Tessier remembers it as the 2001 “Swordfish” heist movie starring John Travolta and Halle Berry. A new vinyl covering has been placed over the panel to give the bank an active look.

Part of the deal with the production company was that afterwards they would install a new vinyl sign. This led to the cover that said “Pomona Arts Colony”. Designed to be temporary, it had been there for 20 years.

Here are some related news. A 1960 Lytton branch designed by Kurt Meyer at 8150 Sunset Blvd. in West Hollywood was demolished in 2021 despite being listed. The site will be used for new construction by architect Frank Gehry. What were we saying earlier about one-upmanship?

“Now that the Lytton on Sunset Boulevard has been destroyed,” Tessier said, “Pomona is Meyer’s oldest landmark.”

It may or may not be more significant than Pomona having the second oldest McDonald’s building, dating back to 1954. But it’s something.

When the “Arts Colony” envelope was erected in 2001, a pin was found in the motor that had prevented the sign from rotating. Engine repair was not worth it, but the pin was pulled out.

“To our surprise, every time there was a strong wind, the panel would turn again. That’s what he did for two decades,” Tessier said.

Now the sign is painted aqua, both sides of the sign finally promote the school, and the plaza is accented with bright colors.

Founded in Norco in 2012, Bold Patriot Brewing Co. moved to Nashville in 2020 when owner Todd Hood joined the wave of Californians moving to Tennessee. Hood told the LA Times that he was a “happily transplanted ex-Californian,” praising the voluntary state’s freedom and low cost of living. That said, Tennessee’s beer excise tax is the highest in the country and there is a state tax of 15% per drink. All the more reason to drown your sorrows.

Ato Forson pleads not guilty to causing financial loss of 2.3 million euros to the State