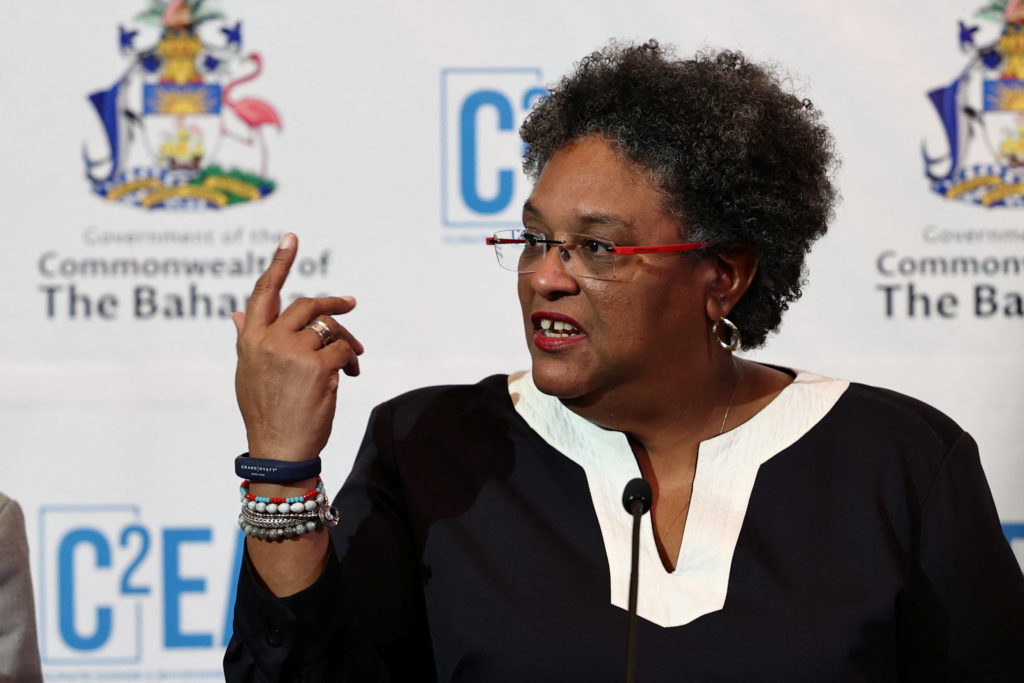 SHARM EL-SHEIKH, Egypt (AP) — At the United Nations climate summit in Egypt, leaders of developing countries repeatedly said it was unfair to expect them to cover the costs of rebuilding after devastating weather events in a warming world, in addition to investing in cleaner solutions. industry when they also pay much higher interest rates on loans than rich countries.

A plan proposed by Barbados Prime Minister Mia Mottley would overhaul how much of development lending works. It also gives a voice to developing countries grappling with mounting debt from climate damage.

“We were the ones whose blood, sweat and tears funded the Industrial Revolution,” Mottley said in a scathing speech. “Are we now going to face a double risk of having to pay the cost of these industrial revolution greenhouse gases?”

Debt has risen in developing countries, sapping funds for education, health and clean energy. Much of the rising debt in some Caribbean countries is linked to extreme storms, Mottley said in a recent essay. The plan would make it easier for countries in the Caribbean, Latin America, Africa and Asia to obtain funds to bolster their defenses against global warming and defer debt payments in the event of a disaster.

Here’s a look at Barbados’ plan, dubbed the Bridgetown Initiative for the island nation’s capital. Proponents say this could be a pathway to unlocking $1 trillion in climate finance.

The plan includes special loan clauses that allow payments to be suspended when a country is hit by a natural disaster or pandemic. This would immediately free up millions of dollars that governments could spend on relief and reconstruction. Barbados has been a pioneer in such clauses, issuing its first sovereign bond last month with a provision to defer payments to creditors for up to two years if the country suffers a “predefined natural disaster”.

The initiative includes a push to expand lending by international development banks such as the World Bank. The bank and its sister institution, the International Monetary Fund, were created after World War II with the aim of financing reconstruction and alleviating poverty. The power of rich countries like the United States and Germany is rooted in institutions. But the World Bank in particular has been criticized for being too risk averse in lending. The Barbados plan would alter risk ratings, crucially lowering interest rates.

Another idea is to create a Climate Mitigation Trust backed by $500 billion in special drawing rights, dues that member countries pay to the IMF that can be levied in times of crisis. Much of it is held by countries that don’t need it, said Avinash Persaud, Mottley’s special climate envoy. The trust could be used to borrow an additional $500 billion from the private sector which could be loaned out at low rates to invest in major climate change mitigation infrastructure projects. Up to $5 trillion in private funding could be unlocked this way, according to the architects of the plan.

Other proposals include a levy on fossil fuel production or an international border carbon tax.

“You’re starting to see the disparity,” Mottley said. “The system is broken.”

After World War II, she said, the victorious Allied nations agreed to cap the cost of Germany’s debt so it could rebuild. Britain refinanced its First World War debt, repaying the last one only in 2014.

“We’re just saying in the developing world that we also need the space to be able to finance our development in the case of climate,” Mottley said. Rich countries account for four-fifths of global greenhouse gas emissions.

Hanan Morsy, chief economist at the United Nations Economic Commission for Africa, told The Associated Press that a number of ideas from the Bridgetown Initiative have also been put forward by African finance ministers. He pointed to another financial inequity: the green bond market that helps finance environmental projects has reached $500 billion, but only 1% reaches Africa.

Mottley first unveiled his idea at the COP26 meeting a year ago in Glasgow, Scotland. Over the summer, she and Persaud convened economists, other academics and civil society groups to work on it.

Now, she says, the momentum of her ideas is gaining momentum.

French President Emmanuel Macron was the first leader of a wealthy country to lend his support.

“We need a huge financial shock of concessional financing,” Macron said in a speech at the opening of COP27. “We have to change the rules, the rules of our big international banks, the development banks, the IMF and the World Bank,” he said. “We can’t wait for the next COP.”

To support Mottley’s plan, “a group of wise minds at the highest level” has been set up tasked with developing climate finance solutions by spring 2023, when the World Bank and International Monetary Fund will hold their annual meetings, Macron said.

As climate-amplified disasters deepen suffering, the stilted international financial system designed for an early age could be about to change, led by those on the front lines.

Wanjohi Kabukuru contributed to this report.