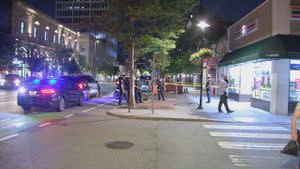 Four people were charged with three stabbings in Cambridge earlier this month.

The stabbings took place in the central square on July 10. The same man was the victim of two of the incidents, according to police.

The first stabbing occurred after an apparent scuffle near the Mass intersection. Ave. and Pleasant Street around 4 a.m., police said. A man arrived at the entrance to a Cambridge hospital with stab wounds and was treated and discharged later that morning.

At around 8:04 p.m. that evening, a double stabbing was reported in the central square. One of the victims was found on Massachusetts Avenue and the other – the same man who was stabbed earlier in the day – was found on Western Avenue.

Both men suffered life-threatening injuries but are expected to recover.

Police investigate after 2 men were stabbed in Cambridge

Police said four suspects were arrested in the area. They face the following charges:

Dakari Henderson, of Boston: Assault with a weapon with intent to murder; and assault and battery with a dangerous weapon.

ICCI urged the government. To reduce the interest rate to promote the economy