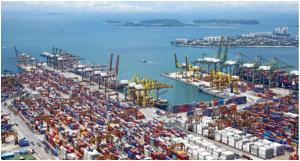 
The Korea International Trade Association (KITA) said in its April 11 report that interest rate hikes in the United States could negatively impact South Korean exporters. “The interest rate adjustment is expected to lower demand in emerging economies and affect South Korea’s exports,” he said, adding, “At the same time, the strong dollar will likely result in higher import costs and lower profitability for exporters.

“In 2013, the ratio of South Korea’s exports to 23 emerging economies, including Taiwan and Brazil, to its total exports was 48.1%, then the ratio fell to 44.5% in 2017. after the rise in interest rates in the United States,” he said. explained, continuing: “The same thing is likely to repeat itself soon and, in fact, the ratio has already fallen by 1.5 percentage points from December last year to February.”

This year, the growth rate of emerging economies is expected to fall from 6.5% to 4.8%. Brazil’s central bank raised its policy rate seven times last year. Under these circumstances, the liquidity of South Korean exporters is rapidly deteriorating. South Korea’s non-large corporate lending rate increased by 0.8 percentage point from May last year to February, while it increased by 0.5 percentage point from July 2016 to October 2018, when US interest rates rose.

The profitability of South Korean exporters is also expected to be affected by rising raw material import costs. The won-dollar exchange rate has never fallen below 1,200 won per US dollar since last month. Unprocessed goods and intermediate goods account for 73% of South Korea’s total imports, and the US dollar accounts for no less than 78% of its import payments.

Why aren’t interest rates on savings accounts going up too? – Boston News 25