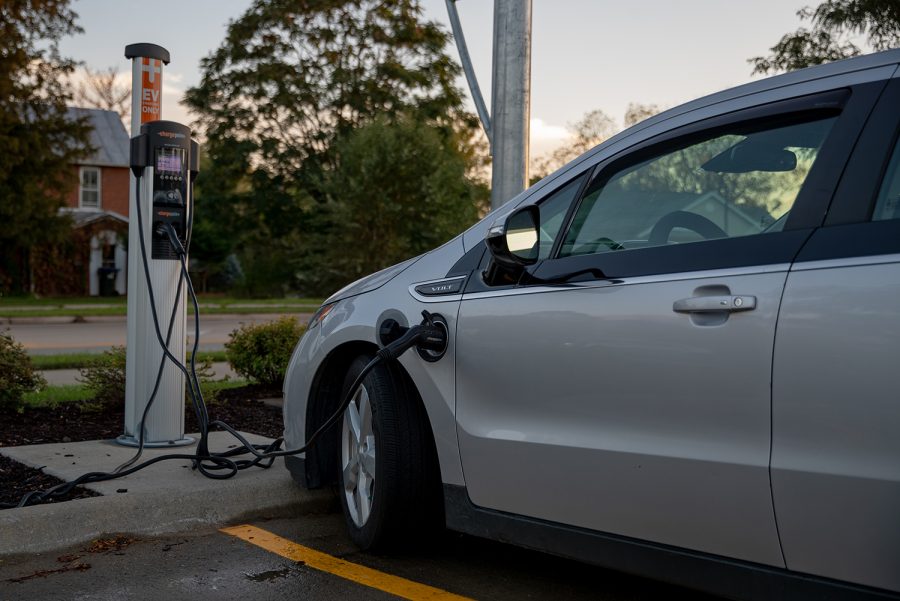 Iowa City is nearing its charging station target outlined in the Eastern Iowa Electric Vehicle Readiness Plan. The plan is to increase the infrastructure of electric vehicles to account for the increasing adoption rates in the city.

The Eastern Iowa Electric Vehicle Readiness Plan, finalized in June 2021, indicates that the areas with the highest electric vehicle adoption rates were the areas that had at least 450 public charging points per million inhabitants.

According to Department of Transportation reports, the number of electric vehicles registered in Johnson County has increased from 587 vehicles in 2020 to 692 in 2021.

“The data clearly indicates that the adoption of electric vehicles is accelerating, and I think it is accelerating in a way that even five years ago people might not have anticipated,” Gardner said.

The Electric Vehicle Readiness Plan was created in collaboration between Iowa City, Cedar Rapids, Dubuque, Davenport, Waterloo and Cedar Falls. The purpose of the plan was to create a guide for each city to expand the infrastructure of electric vehicles like charging stations, Gardner said.

â€œWe recognize that when people have vehicles, they don’t just want to drive in the city they live in, they want to be able to get to other places,â€ Gardner said. â€œWe wanted to make sure that someone who owns an electric vehicle in this region can travel with confidence throughout our region. “

â€œWhen I started this position in 2018, there was only one DC fast charger in Iowa, and now there are 40 in operation,â€ Anderson said.

â€œAll of the major automakers have announced that they will only be producing electric vehicles within the next decade,â€ she said. â€œWe’re going to have to be able to refuel these vehicles. “

Funding for the expansion of electric vehicle infrastructure, like charging stations, is the responsibility of each city, Gardner said. For example, in Iowa City, charging stations in public parking lots are funded by parking revenues, she said.

There are state-level funding options, Anderson said. One way to fund these projects is to apply for a zero-interest loan from the Iowa Energy Office, which funds alternative fuel infrastructure projects, she said.