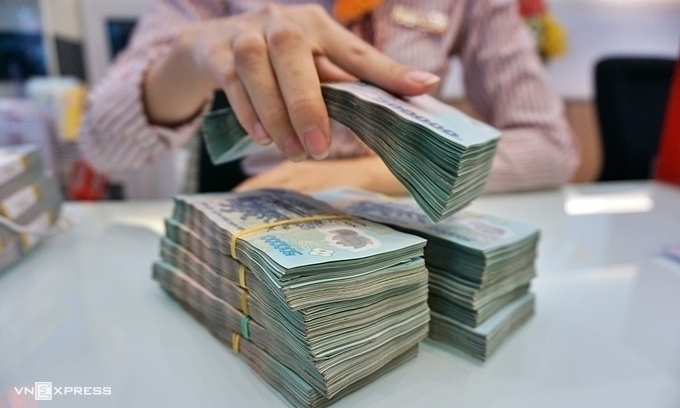 Corporate interest rates are hovering around 9%, with both up around 2 percentage points since the start of this year.

The State Bank of Vietnam has hiked interest rates twice since September, the most recent being on Oct. 24.

Hien, a pension owner in the central province of Khanh Hoa, said the interest rate hikes have been a blow because on her VND5 billion ($201,600) loan, she has to pay 15 million additional VND per month.

She said she mistakenly thought the floating rate would only be 9.5-10.8% after the prime interest rate period ended.

She had borrowed to buy the guesthouse for rent to tourism workers in the city of Nha Trang for monthly rents of 1.5 to 2 million VND per room. But tourism in the city has not fully recovered from the Covid-19 pandemic, so the occupancy rate is currently only 50%.

To earn enough money to handle the higher interest payments, she has to run another small business transporting building materials, mostly steel. But structural steel sales fell 50% in October, so activity is also stagnating.

Hien wants to sell land, but has no takers since banks tightened mortgage terms. “I do my best to pay the bank interest in due time so that the loan does not become a bad debt and my collateral is not seized.”

Similarly, Tinh, in the southern province of Kien Giang, and two of his friends are struggling to pay extra bank interest because they borrowed to buy land nearly a year ago, but were unable to sell them afterwards. the real estate market collapsed.

Tien, one of his friends, borrowed 800 million VND from a bank and another smaller loan from his relatives.

The interest he is supposed to pay has increased from 8% to 12.5%, and therefore the official’s entire salary is now used to pay the interest and part of the loan.

Tung, another friend of Tinh, currently works as a taxi driver from 7 p.m. to 4 a.m. to pay monthly bank interest of over VND 10 million and to make ends meet.

Hang, who owns a dragon fruit farm in the central province of Binh Thuan, has also been on edge for two weeks after interest on his bank loan of more than VND 1 billion increased.

She fears that the bank will seize her guarantee if she does not pay the interest in the coming months.

“I borrowed more than one billion VND two years ago, and the interest rate went from 7% to 13% on October 25. For a farmer like me, it is difficult to pay additional interest of several million dong per month, while dragon fruit prices sometimes drop to 2,000 VND per kilogram.”

The dragon fruit harvesting season hasn’t started yet, while Hang has no other sources of income, so she has to borrow money from her relatives and friends to pay the interest.

“Now I resort to selling several sao of land, even at 30-40% less than market prices.”

Explain the rise in lending interest ratesexperts said rates had fallen to low levels in recent years and are rising again, mainly due to increased demand for credit as the economy recovers.

Many banks are worried that interest rates won’t come down anytime soon and are heavily reliant on cash, especially government spending.

A lot of money was absorbed by issuing government bonds, fiscal revenue exceeded target and government spending was slow, leading to a drying up of liquidity and pressure on lending rates, it said. they explained.

But the central bank assured that the money was still allocated to priority areas and that eligible companies, especially in production and trade, could access loans at preferential interest rates.

The Bank of Baroda increases the interest rate on loans at all maturities; Check the…