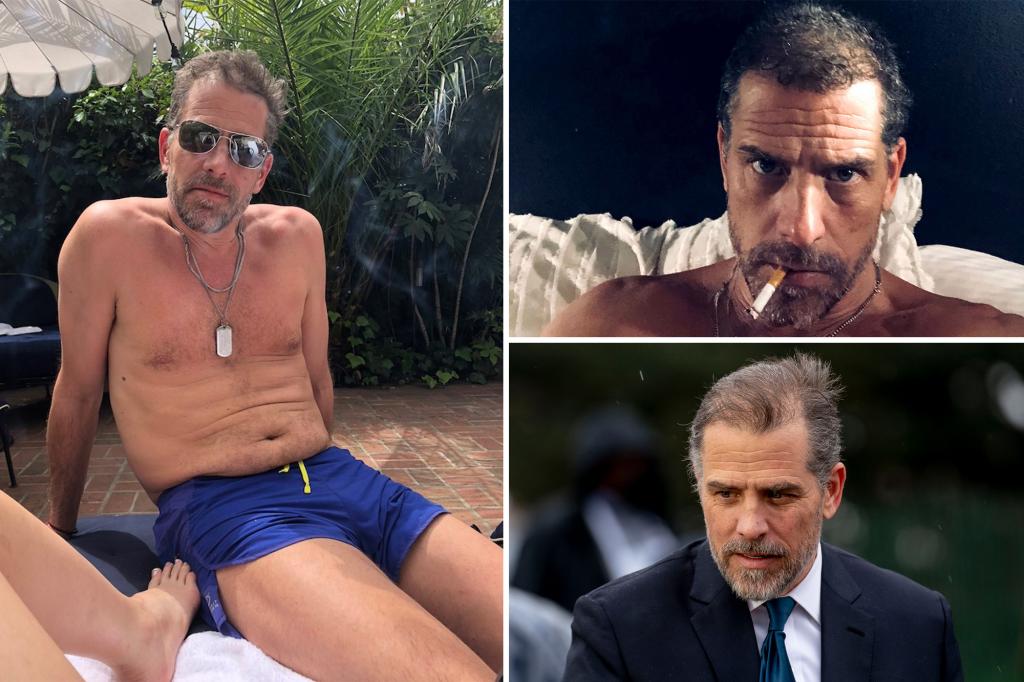 The laptop evidence the FBI could use to indict Hunter Biden

Hunter Biden’s financial dealings and overseas exploits uncovered on the infamous laptop exposed by The Post could potentially be used by prosecutors in their tax crimes case against him.

When federal authorities launched their investigation in 2018, investigators were initially looking into whether Hunter and his associates violated various tax and money laundering laws during their dealings in China and other foreign countries.

Although the evidence available to federal authorities is unclear, the exploits of President Biden’s 52-year-old son also fall within the scope of the federal Foreign Agents Registration Act (FARA).

Emails and other documents related to Hunter’s various overseas dealings, which point to his alleged plan to sell his father’s influence for millions of dollars to American adversaries, came to light when they were discovered on his abandoned laptop.

Hunter and his associates had lucrative deals with a Chinese energy company, CEFC China Energy Co, including one that lists a potential cut for then-Vice President Joe Biden, according to the emails.

An email sent to Hunter by one of its business partners, James Gilliar, on May 13, 2017, described the “remunerations” of six people involved in an unspecified business venture with the Chinese conglomerate.

The plan included a proposed 10% share passed on by Hunter for “the big guy” – a reference that Hunter’s former business partner, US Navy veteran Tony Bobulinksi, has since claimed is referring to Joe Biden.

Hunter, who was identified as “president/vice president based on the CEFC agreement,” had his salary set at “850,” according to the email.

The email also described a “provisional agreement”, under which 80% of the shares of the new company would be divided equally between four people. The four people’s initials matched the sender of the email and the three recipients – with “H” apparently referring to Hunter.

Hunter also emailed on August 2, 2017 regarding a deal he had reached with late CEFC chairman Ye Jianming over 50/50 split ownership of a holding company that is expected to earn more than $10. million dollars per year. for Biden’s son.

He wrote that Ye – who has not been seen since his arrest by Chinese authorities in 2018 – agreed to a three-year consultancy contract with CEFC which would pay Hunter the hefty annual sum “for introductions only”.

“The president changed that deal after we told me[t] IN MIAMI TOWARDS A MUCH MORE SUSTAINABLE AND LUCRATIVE ARRANGEMENT to create a 50% percent holding company [sic] owned by ME and 50% owned by him,” Hunter wrote in the email.

“Advisory fees are part of our revenue stream, but the reason this proposal from the president was so much more attractive to me and my family is that we would also be inn partners. [sic] JV equity and profits [joint venture’s] investments. »

A provision of 1 million dollars

A “lawyer recognizance letter” executed in September 2017 was also discovered on the laptop that promised Hunter a retainer of $1 million.

One of Ye’s top aides, former Hong Kong government official Chi Ping Patrick Ho, had offered Hunter the big job of “advising on matters relating to U.S. law and advice relating to hiring and to the legal analysis of any US law firm or attorney.

Ho was subsequently convicted by a Manhattan federal jury in 2018 of two schemes to pay $3 million in bribes to government officials in Chad and Uganda. He ended up serving a three-year prison sentence and was deported from the United States to Hong Kong in 2020.

$1 million a year to sit on a Ukrainian board

Burisma Holdings Ltd., the Ukrainian energy company, had paid Hunter $83,333 a month to serve on its board of directors beginning in May 2014, bills on the laptop issue.

While receiving the big payout, Hunter introduced Burisma executive Vadym Pozharskyi to his father – who was then vice president – at a dinner party in Washington, DC, in April 2015.

Less than a year later, Biden flew to Ukraine to urge government officials to fire a prosecutor who was investigating Burisma at the time.

Biden has said in the past that the prosecutor was not doing enough to crack down on corruption — and the push was unrelated to Hunter’s position.

Then, two months after Biden stepped down as vice president, Hunter’s monthly pay from Burisma was cut in half.

Pozharskyi had informed Hunter of the reduction in a March 19, 2017 email that said “the only thing that’s changed is the compensation rate.”

The amount shown on invoices related to Hunter’s Burisma was later reduced to $41,500 as of May 2017.

A diamond once given to Hunter by Ye Jianming – the since-missing CEFC chairman – has already been examined by investigators as part of the ongoing tax investigation, according to a 2020 CNN report.

Emails from Hunter’s laptop show the sparkler had become a sticking point during his divorce from first wife Kathleen Buhle.

In August 2017, his lawyer demanded proof that he was “in a safe – accessible only by both parties together” and threatened to seek an emergency injunction against Hunter “to restrain him from continuing to dispel its assets, including the diamond”.

Hunter had told The New Yorker that he obtained the jewel from the then CEFC president following a presentation dinner in Miami amid Biden’s divorce.

Buhle had estimated in court papers that the diamond was worth $80,000, but Hunter estimated its value closer to $10,000.

Pursuing deals with a Mexican billionaire

Hunter also pursued potential deals with Mexican billionaire Carlos Slim when his father was still in the job, according to laptop records.

He became involved with Slim after attending a State Department luncheon the Mexican tycoon was also present in May 2010, as seen in the diary on his laptop.

Following that lunch, Hunter made annual trips to Mexico between 2012 and 2015. He also held in-person and videoconference meetings with Slim’s sons, Carlos Jr. and Tony Slim, between 2011 and 2015. L The notebook does not lose light on what, if anything, may have developed from these encounters.

According to emails on the laptop, Hunter’s uncle Jim emailed him on May 7, 2015 about a possible deal involving Slim and Petroleos Mexicanos (Pemex) – an oil and gas company. Mexican state-owned gas company.

“Having a real deal with Pemex (Carlos Slim) needs funding literally for a few days to a week,” Jim wrote in the email. “Having the seller (refinery/slims) and major buyer delivered from the pipeline in (h/USA) Nothing is simple but it comes close. As always the devil is in the detail! party long skirts?

Hunter and his business partner Jeff Cooper were hoping to get Slim money for an online gaming company, Ocho Gaming, and a digital wallet company, ePlata, which Cooper ran. Hunter held a 5.25% stake through his law firm, Owasco PC.

Separate from the evidence found on the laptop, prosecutors are also reportedly looking into Hunter’s 2014 purchase of a $142,000 plug-in hybrid sports car from Fisker Karma.

But Fisker went bankrupt in 2013 after receiving $192 million in federal loan repayments, The Wall Street Journal reported in March.

Enjoying ties to the White House and China

Hunter’s business contacts have touted his access to his father, “state, treasury,” his relationship with then-Secretary of State’s son-in-law John Kerry, as well as his ties to the “highest level” in China, as they considered whether to work with him. about a possible deal with Libya in 2015, emails unrelated to the laptop show.

The emails, obtained by Insider, date back to 2015 and refer to Hunter’s help with a deal involving billions in Libyan assets frozen by the Obama administration.

In the first email, dated Jan. 28, 2015, Democratic donor Sam Jauhari repeatedly referred to Hunter as “Son No. 2” — an apparent reference to Joe Biden’s role as Vice President at the time — and noted that Hunter had requested a $2 million retainer.

The business contact listed a series of positives to working with Hunter, including his business relationship with Kerry’s son-in-law, Chris Heinz, and Hunter’s apparent self-proclaimed high-level access to China.

“Through phone conversation, I met son #2. He wants $2 a year fee +++ success fee. He wants to hire his own – it may be a restricted circle of people for reasons of confidentiality. His dad decides whether to show up or not,” the email reads.

“His positives are that he is the president of the UN World Food Programme, son of No. 2 who has a file on Libya, access to the state, treasury, business partner SofS [Secretary of State] J [John] ForbesK [Kerry] son and since he travels with dad he is connected everywhere in Europe and Asia where MQ [Muammar Qaddafi] and LIA [Libya Investment Authority] had frozen money. He said he had access to the highest level in the PRC [China]he can help there.

Hunter and Heinz founded Rosemont Seneca Partners, a billion-dollar private equity firm, in 2009. Their business relationship soured when Hunter opted in 2014 to join Burisma’s board.

Mortgage interest rates are scary these days. Here are 3 ways to reduce them