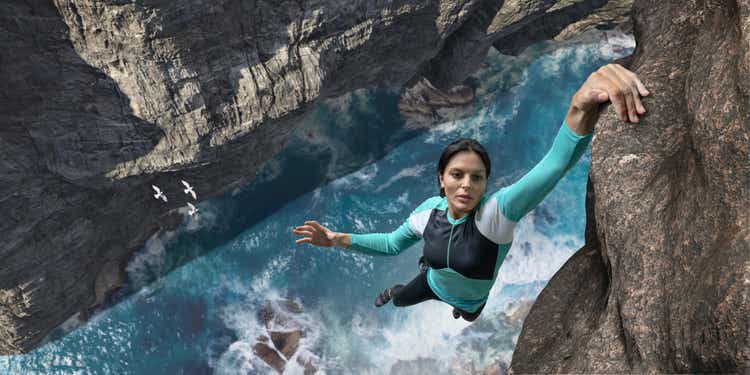 I love the old adage “everything in moderation”. The extremes on either side of anything are never sustainable, as seen in the image above of the woman holding the side of a mountain with one hand. With regard to interest rates in the economy, we can say the same thing.

Investors should appreciate the importance of interest rates in the cost of servicing debt, particularly as measured by the size of the economy.

The US economy, and the world for that matter, has an inflation problem. The problem is precisely that the cost of living exceeds the rise in wages, creating what is called stagflation. The inflation rate in the United States is 7.76% in October 2022. Wages in October only increased by 4.72%.

One of the main drivers of inflation is the overall credit growth rate. The Federal Reserve Bank aims to raise interest rates or the cost of borrowing new funds in an effort to slow credit growth. This in turn will have a strong impact on the inflation rate on the monetary side.

The Fed raised rates very quickly and the US prime interest rate is now at 7.00%. This is the rate banks will charge their best customers for the cost of borrowing money. It is this rate that is a good exercise of how big the interest rate on money is relative to overall debt and the size of our economy.

Looking at the longer-term prime rate, since 1980, the bank loan prime rate has consistently experienced lower highs and lower lows. Today the rate is 7% and that is higher than the last high at 5.50% in 2019. So we have now broken those lower highs levels. It certainly sets a new paradigm for what’s to come, I think.

There is, however, a substantial difference this time around and it has to do with the amount of debt versus the overall economy, as I will try to elaborate.

When we look at debt, we have to look at the overall debt of the US economy. Mortgage debt, commercial debt, federal government debt as well as state and local government debt. Student loan debt, auto loan debt, and credit card debt. Add it all up and we have what is called “all debt securities and loans in all sectors”. The graph for it looks like this:

A good exercise to do is to see how the cost of prime rate money would compare to the overall economy or GDP.

I simply take the prime rate and multiply it against the overall debt of the US economy and compare that as a percentage of GDP.

First, I would like to show the magnitude of US debt relative to the US economy, as this plays a substantial role in the interest rate it can withstand.

US debt stood at around 3.61 times its GDP in Q2 2022. This compares to 1980 when it was around 1.6 times GDP. Today, the US economy is highly indebted and its ability to service debt at high interest rates is not only unsustainable but impossible if rates get too high.

Everything is relative, so this exercise allows us to put the prime interest rate into perspective in relation to the level of indebtedness and the economy.

History suggests that such a high interest rate relative to an economy’s debt is simply unsustainable. Perhaps interest rates will peak in Q1 2023, but once they do, as has always happened in the past, rates will fall sharply to eventually ease the heavy burden of the cost of silver.

This is more or less what needs to happen to keep the economy buoyant given its indebtedness. A slowing economy and the destruction of demand will certainly prove to be a deflationary force that will help push rates down. The same goes for falling real wages which will help reduce inflation as demand will be forced to fall. This implies a lower standard of living compared to recent years.

Of course, anything is possible and policies can change. Rates could stay very high and defaults could also become the answer to lower debt and inflation, but lead to huge economic hardship in the process.

It should boil down to what is in the best interest of humanity and in this case, always in moderation.

The Bank of Baroda increases the interest rate on loans at all maturities; Check the…